“We are extremely pleased to be honored by this well-respected awards program,” said AP Vice President of Marketing Strategy Kimberly A. Branch, CFP®, who oversees Studio 454 management. “The video content that we produce for the benefit of our affiliated investment professionals and employees allows us to stay connected to each other and highlight what’s happening within the company, as well as in the financial services industry, in a comprehensive way.”  Manager of Media Production and Studio Operations T. Craig Poore concurs, stating, “I have always known our in-house creative team to deliver high-quality videos to our AP affiliates. It’s great feedback to receive broadcast industry recognition from this national award program.” The independent broker/dealer made further investment in its on-site media production facility this year by adding a modular set, capable of creating a dozen different set options for its many in-house video productions. The firm’s investment professionals, focus partners and home office staff members are now even better equipped to relay their messages to the advisor community and end clients through this new enhancement.

The 25th Annual Communicator Award winners were announced by the Academy of Interactive and Visual Arts in May 2019. Entries from around the globe were judged by the largest and most competitive awards program that honors creative excellence for communications professionals. The wining submission, entitled “Top Five Reasons to Attend Connections,” is a promotional video geared toward AP’s advisor community highlighting the benefits of attending the firm’s annual national conference. Winning entries for the Award of Distinction are judged on the merits against a standard of excellence within a given category.

Since 2009, Studio 454 has been recognized across the media production industry by winning nine prestigious awards, including three previous Communicator Awards and four Videographer Awards.

Winner of the 2019 Communicators Award of Distinction

Headquartered in Holbrook, N.Y., American Portfolios Financial Services, Inc. (APFS) is a full-service, independent broker/dealer and member firm of FINRA and SIPC, offering a complete range of financial services, including personal financial and retirement planning, securities trading, mutual funds, access to investment research, long-term care planning, insurance products and tax-free investing. Fee-based asset management is offered through its sister subsidiary, American Portfolios Advisors, Inc., (APA), an SEC Registered Investment Advisor. Both entities, along with technology entity American Portfolios Advisory Solutions, LLC, collectively reside under the legal entity American Portfolios Holdings, Inc. (APH). Full-service securities brokerage is available through a clearing firm relationship with Pershing, LLC, a BNY Mellon firm, the securities of which are held on a fully disclosed basis. The company currently serves 847 independent investment professionals located in 392 branch locations throughout the nation.  It was named Broker-Dealer of the Year* (Division III) by Investment Advisor magazine in 2015, 2016, 2017 and 2018, as well as one of the Best Companies to Work for in the state of New York for 2016, 2017, 2018 and 2019 by the New York State Society for Human Resources Management (NYS-SHRM) and the Best Companies Group (BCG).

*Based on a poll of registered representatives conducted by Investment Advisor magazine. Broker/dealers rated highest by their representatives are awarded “Broker/Dealer (B/D) of the Year.”

AP’s Studio 454 is a state-of-the-art, broadcast-quality facility conveniently located at the firm’s home office in Holbrook, N.Y. It consistently delivers company news reports and executive messages that are vital to the day-to-day business of its affiliated investment professionals. The studio also specializes in producing a broad array of video content for the independent broker/dealer’s far-reaching advisor community. The Studio 454 environment is fully equipped with motion picture production equipment to shoot multi-camera in high definition, generating professional results in digital format. The full-service facility offers everything from high-tech lighting and crisp sound to variable set options and smooth teleprompter operation. Studio 454’s video production services, which are offered to AP affiliated financial advisors free of charge, are suited to manage any video project optimally and efficiently.

About The Communicator Awards

The Communicator Awards is the leading international awards program recognizing big ideas in marketing and communications. Founded over two decades ago, The Communicator Awards receives over 6,000 entries from companies and agencies of all sizes, making it one of the largest awards of its kind in the world. The Communicator Awards honors work that transcends innovation and craft – work that made a lasting impact, providing an equal chance of winning to all entrants regardless of company or agency size and project budget. 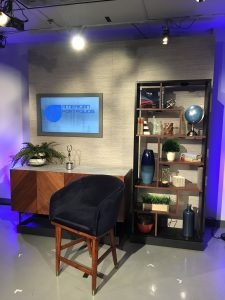 One example of Studio 454’s new modular sets,
an enhancement capable of creating a dozen
different set options for its many in-house
video productions. 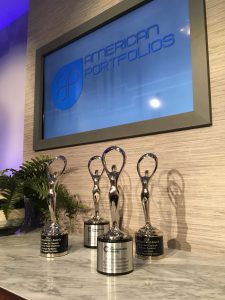